I’ve relaunched Growth Comics as a full site, a few years after pointing the domain at my Gumroad store. Why the change? I have more time to create content and I’ve gotten better at producing quality work, fast. Also, as grateful as I am for you guys buying my stuff and covering my Starbucks tab most days, I’d like to see if I can squeeze a little more cash out of you. Maybe I can get one of those yogurt parfait things. 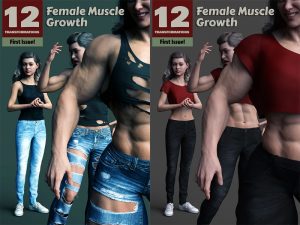 There are a lot of different platforms people use to consume content. Gumroad, which I’ve been using for almost three years, is terrific for distributing PDFs. But since not everybody wants a PDF file, I’ve been using Amazon’s Kindle store to distribute content for awhile, too. There are some issues with Amazon, one big one being that links don’t always work for people in different countries — a dot-com link may not translate directly into a dot-au or a dot-de link. Other issues are that the terms for creators aren’t great, and also Amazon is particular about how much skin shows up on a cover. As an example, see Figure 1. The Gumroad cover is on the left, but Amazon considered it to be too risqué, so I  had to put a shirt on the poor girl.

Recently I’ve started using Smashwords, and one of the nice things about Smashwords is that books published there are available through many other sellers, like Apple Books, Kobo, and Barnes & Noble. There’s even a library lending product that can access Smashwords inventory (so be sure to ask your local librarian about that if you don’t care that she’ll think you’ve got a weird kink).

It’s great that creators have so many distribution options, now, but it presents a little bit of a logistical problem. Where can I share as many as six or seven links for any given product? Also, when I share a link on Amaz0ns.com or deviantArt, whenever a link is changed I have to hunt down all the places I posted it and then edit it to the new link.

The logical course of action was to rebuild Growth Comics as a gateway to my content. So that’s what I’ve done.

Also: It hadn’t been my intent to start blogging again, and I don’t know how much of that I’ll do. But while I was looking at all of the Growth Comics assets, I realized that there’s a Feedburner account still active, and that there are THOUSANDS of subscribers to that feed.

THOUSANDS! Do you know how long it takes to build an audience that size? I wasn’t going to just let that go.

Thus: a blog. A lot of you are probably seeing this post because you subscribed to the Growth Comics Feedburner feed sometime after 2007. Please feel free to unsubscribe using the link if you don’t want to get occasional emails. I hope you’ll keep it, though. I promise I won’t be posting five or six days a week like I used to. I’m thinking maybe twice a month, but we’ll have to see what happens.